The Golden Age - Live At The RC- GRAND OPENING 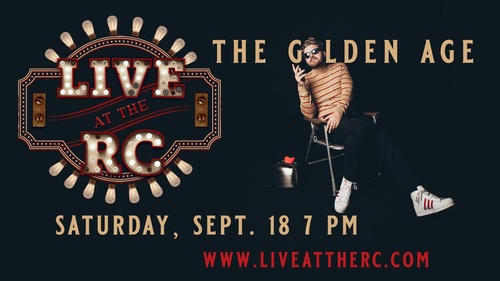 The Golden Age at Live At The RC
www.TheGoldenAgePage.com

American modern songwriter and musician Bryan Simpson (former front man of alt-bluegrass ensemble Cadillac Sky) is back making string band music that is equal parts preservation and rebellion when he arrives under the moniker The Golden Age fresh from the release of his debut album, “I’m Sure It Will be Fine.”

"I first met Bryan and Cadillac Sky nearly 20 years ago when they were with Skaggs Family Records. Bryan is one of the pioneers of progressive Bluegrass - taking his ability to play nearly every Bluegrass instrument with ease, adding a few others, then pairing that with his unique powerful voice to continue creating sounds that are genre-bending, but still commercial. Bryan is also a world class writer with the latest song he's written with Shy Carter and David Lee Murphy that has a guest spot with Cole Swindell called "Beer With My Friends" that was featured on the Bobby Bones Show last month.

Now with The Golden Age, Bryan continues his originality with great music and dynamic stage show along with his bandmates - former Cadillac Sky mate Matt Menefee on banjo, Geoff Sanders on bass, Jed Clark on guitar and Christian Ward on fiddle.
To kick off our new "Live At The RC" shows at The RC Entertainment and Event Center, we wanted to make a stamp on our vision for this place - where original music and creativity are showcased at a high level - and not just one style - and The Golden Age certainly fits that bill.

We are actively booking musicians and entertainers in our new event space to show off our downtown of Newport in the beautiful Smoky Mountains, where it's a little off the beaten path of the hectic crowds but offering world class entertainment. We want everyone who enters through our doors to feel like they are family and belong. The Golden Age is the perfect first band for us to start that journey. We're honored they agreed to be a part of our story." ~ Sheri Clark, Producer, Live At The RC
Event Media:

Location:
LIVE AT THE RC- THE RC ENTERTAINMENT AND EVENT CENTER
205 East Broadway
Newport, TN 37821
Date/Time Information:
Saturday, September 18
Doors open at 6 PM - Show at 7 PM
Contact Information:
Follow us on Facebook at www.facebook.com/thercfoundation!
Fees/Admission:
Celebrate the fabulous grand opening of Live at the RC with this FREE concert! This event is hosted by The RC Foundation, donations will be accepted to grow more events like this, but is not required to enter the event.
Set a Reminder:
Business Directory News Releases Events Calendar Hot Deals Job Postings Contact Us Information & Brochures Weather Join The Chamber